First ECPE's Book: Needs and Barriers of Prosumerism in the Energy Transition Era

The effective enforcement of energy transition is one of the keys to the successful fight to climate change. The interplay between the sustainable UN Agenda 2030 goals is a new interesting ground for the development of intersectorial and multidisciplinary studies. Thanks to University of Camerino which is focused on the contamination between different scientific areas and really engaged in strengthening international research, a group composed by more than forty researchers of ten different nationalities is studying the energy policies and the new phenomenon of energy prosumerism. This book is the first direct result of the research activities granted by University of Camerino under the Programme FAR 2019 in the ECPE Project ‘Enabling Consumer to become Prosumer in the Energy transition era’ (more details about the project ECPE are available at https://ecpe.unicam.it/). The object of this book is to collect and analyze the main barriers to self-consumption and prosumerism. Difficult as it is to discuss all obstacles in a single volume, the book focuses on selected barriers which impede the development of new types of fossil free energy production and consuption. The energy communities could play a central role in the implementation of the energy transition strategies, but legal, social, economic, political and cultural barriers can hinder their spread. To analyze the barriers and to find how to eliminate the obstacles to energy transition policies is pivotal to enhance research activities focused on the new EU Regulatory framework. Most in general it is crucial a multidisciplinary approach focused on the fight to climate change and the implementation of sustainable development. In this book are collected several articles which offer a different perspective on the energy transition barriers form different points of view and under different methodologies. The book is composed of four parties. The first one is dedicated to the analysis of the methodology and the results offered by questionnaires supplied online in two languages (Italian/English). The survey is the basis of the Working Paper which is the deliverable of the ECPE Work Programme n. 2 and which constitutes the ground for a discussion into the research group. The second part of the volume collects the contributions focused on the social and economic barriers to prosumerism, while the third one is dedicated to a description of failure cases of self consumption. Lesson learned by failure experiences in the world could favour a good implementation of the new EU Directive Renewable Energy Directive 2018/2001 ( RED II) and Directive on common, rules for the internal market for electricity 2019/944 ( IEM) in Italy an European Country which is strategic in the Energy policy of the Foreword 1 Mediterranean area. The last part of the book is composed of the visions and perspectives offered by Italian testimonials engaged as actors in the new energy market with different roles. I am grateful for the generous support given by the editorial staff composed by Gopi Battinemi, Roberto Garetto, Federico Pascucci, Giovanni Russo and Karina Zabrodina, precious collaborators and valid researchers. Thanks also to the Scientific Committee which honoured our work: Marine Cornelis, Francisco Lledó Yagüe and Luis E. Quintero. As editor I am sure you will appreciate the volume which would like to offer an insight on new issues and challenges offered by the energy transition era. 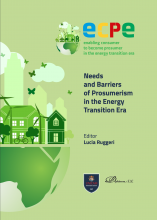 We also use analytics